A Brighton corner shop boss has been jailed for two years after being caught with illicit cigarettes and tobacco valued at more than £126,000.

Sherwany, an Iraqi father of three, had pleaded guilty at a previous hearing at Lewes Crown Court to six charges related to the scam.

The judge ordered Sherwany to forfeit his BMW car in which some of the illicit goods were found. And he was landed with paying prosecution costs of £8,542 and a victim surcharge of £156.

The judge also ordered the forfeiture of the cigarettes, tobacco and a sum of cash.

He said that Sherwany was being sentenced for his persistent offending. He had a previous conviction from 2019 for the same behaviour, when he was given a suspended prison sentence.

Emily Lanham, prosecuting, said that officers from Sussex Police and Brighton and Hove City Council carried out a joint licensing visit to the Preston Street shop on Wednesday 6 October 2021.

They found a quantity of alcohol stolen from retail chains such as Marks and Spencer and Lidl, among others, and a large amount of illicit tobacco.

She said that these items were seized and taken to a secure store for examination and that tobacco makers said that the tobacco fell into three categories.

Some were illicit or fake cigarettes, not made by legitimate firms, or they were genuine cigarettes that had been made for sale on the continent – or they were non-duty paid.

The third category included cigarettes intended to be sold duty-free or obtained before any import duty had been paid. As such, the court was told, it was not legal to sell any of them in Britain.

The council’s trading standards team obtained a number of warrants to enter the premises owned or controlled by the defendant.

Raids were carried out on Thursday 25 November last year when officers found “a substantial amount of illicit tobacco” – with an estimated retail value of more than £150,000.

Most was found at Sherwany’s home address, given as Eshton Road, Eastbourne, at a previous hearing. 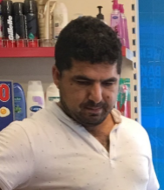 Miss Lanham said that samples were sent away for analysis, with tobacco makers reporting that, as with the first seizure, none of the cigarettes were able to be sold legally sold in Britain.

These were consistent with a large commercial premises in a big city, with significant sums of cash – often four figures – withdrawn from those accounts daily.

Investigators found no audit trail or explanation as to where the money went after it was withdrawn.

More tobacco was also hidden in a BMW car outside the address. This was seized and impounded.

The court was told that Sherwany had dodged tax totalling more than £100,000 as a result of his illicit trade.

Jay Shah, defending, said that Sherwany had arrived in Britain in about 2002 and that he was a leaseholder – not a shop owner – who had borrowed money and run up considerable debts.

Mr Shah said that there was no evidence that he ran any shops other than Burnett’s, in Preston Street.