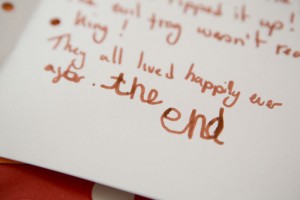 “I found an app that counted the number of words I’d written on Facebook since I joined, and it was about 120,000 – well over twice the size of The Great Gatsby – and meanwhile I was struggling to finish the novel I’ve been working on for years,” says Sarah Lewis, founder of Brighton Writers Retreat.

“I was horrified. I’d also just had a baby and was complaining that I didn’t have any time to write any more, but somehow had time to waste on the internet.”

The day long retreats are simple. Sarah locks a bunch of writers in a room with no internet but limitless caffeine and biscuits, and sets them to task with friendly competition, personal goals, gold stars for progress.

It sounds too simple to be true, but the results are more than impressive. The current word count record holder is Alexa Radcliffe-Hart, soon to be published writer, and editor for Word Factory, who wrote over 7,500 words during one retreat.

Sarah says, “People ask me how to stop procrastinating and there really is only one answer, and that’s to sit down at your computer and write.

“The internet is a menace, frankly, and should be turned off so people can get on with their lives.

“It can be daunting though. To make it less intimidating the retreats aren’t necessarily about quality but quantity.

“You can’t make something good if the first draft doesn’t exist to begin with.”

But the quality is there as well. There are two novels which have been finished at the monthly workshops, Jo Gatford’s award-winning White Lies and Mark Cassell’s The Shadow Fabric, not to mention countless short stories, blog posts and essays.

The events have been running for two years, with the help of New Writing South, the local literature development agency, and are sold out most months.

Sarah is now expanding down the coast to Worthing where she is running Saturday morning writing drop-in workshops on the beach, and is also finishing her first novel thanks to a generous Arts Council grant.

There is also a children’s workshops, called How To Write A Novel In 60 Minutes, which takes kids aged between 7 – 10 on a very speedy journey explaining why Harry Potter and Star Wars are actually the same story, how to create a character, and writing the beginnings, middles and ends.

This year, Sarah is taking How To Write A Novel In 60 Minutes to Camp Bestival for the first time, and the workshops are supported by Viking Direct, who are supplying over 1,000 wiggly eyes and countless felt tip pens.

Retreats are held monthly at The Writers’ Place on Jew Street in Brighton, or see www.brightonwritersretreat.co.uk for more details.