Brighton man with Parkinson’s makes exhibition of himself 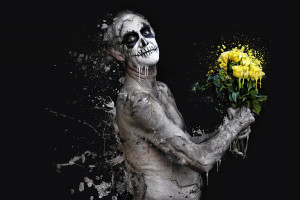 When former Brighton solicitor Tim Andrews was diagnoses with Parkinsons in 2005, he decided to use it as the springboard for a remarkable photographic project.

Nine years later, he has become a model for more than 300 photographers who have captured him in a huge range of styles and concepts.

More than 50 of these photographs are now going to be exhibited as part of this year’s Brighton Photo Fringe at Create Gallery, New England House, New England Street, Brighton from 4 to 17 October 2014.

The show will feature the work of mainly Brighton based photographers, including his wife Jane, with a few exceptions.

Tim says: “When people ask me if I could choose not to have Parkinson’s and have my old life back my answer is still ‘no thanks, I’m happy as l am doing this project’.”

Julia Horbaschk, photographer and co-curator of the show, said: “A remarkably democratic project, it allows the viewer to see one person portrayed in many different ways. A portrait, a self-portrait and perhaps an autobiographical account of the photographers themselves.”