It came first in the Putting Passengers First category and won the Outstanding Personal Contribution award.

The train company was also highly commended in four categories.

Southern’s new smartcard The Key helped it win the Putting Passengers First category in a joint entry with its partner in the project, Cubic Transportation Systems.

Southern’s commercial director Alex Foulds said: “Putting passengers first is what we are all about so to win this category is especially pleasing.

“I’m incredibly proud that the work our smartcard project team and our partners Cubic have put into making the Key smartcard happen has been recognised with this great win.

“The work they have put in is benefiting our passengers now and will benefit passengers in the rest of the south east who will enjoy smartcards in the future, based on their work.”

Southern said: “The Key has achieved industry first after industry first, most notable of which was the integration of the Key smartcard system with London’s Oyster readers.”

Last week it also became possible to buy a Travelcard on the Key.

The judges couldn’t decide on a clear winner of the Outstanding Personal Contribution category so they awarded it jointly to two Southern staff.

One of the joint winners was Southern Rail Neighbourhood Officer Matt Lenton. He was nominated because of the care and compassion he showed when helping a suicidal person at Hassocks Station.

Despite being off-duty, he spent hours talking to the individual, took him for a cup of tea and gave him his number should he need to talk further.

The suicidal man wrote to Southern to explain how Mr Lenton had helped him and changed his outlook on life. 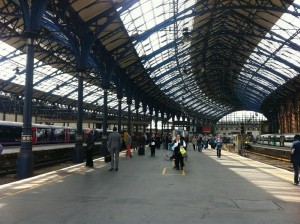 Brighton Station – before the most recent makeover

The other joint winner was Southern train carer Peter Harding who works at the company’s Eastbourne depot.

The introduction of a new fleet of trains was recognised in the Project of the Year category and Southern driver line manager Clare Williams in the Outstanding Personal Contribution (Management) category.

Southern was also a finalist in the Project of the Year category for the new platform 7 construction project at Gatwick Airport Station.

And the company was a finalist in the Putting Passengers First category for the communications campaign for the Christmas 2013 blockades on the Brighton main line.

Mr Foulds said: “Not everyone can win but it’s great that the work done behind the scenes by individuals and teams has been recognised with commendations and finalist spots.

“These industry awards are hard won and this recognition is another reminder of the great business we have built and the great people we have to support it, providing the very best service for our passengers.”