A conman tricked a vulnerable pensioner in Portslade into letting her into her home so he could steal silver and ornaments. 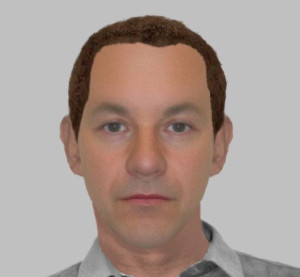 The man knocked on the 86-year-old woman’s home in Melrose Avenue at about 11.30am on 19 September and told her he was looking for watches and jewellery to buy.

When the woman went into her home the man followed her in and began picking up items and searching her cupboards.

She told the man to leave but he ignored her and continued to search the home.

He took the victim’s hallmarked solid silver cutlery and a small glass bottle with painted flowers on it and left, leaving the woman £17 for the items.

The man was in his 40s or 50s, clean shaven and about 5ft 5in tall. He had short dark hair and was wearing dark trousers and a patterned shirt.

Police today issued an efit of the man and a witness appeal.

Detective Constable Scott Moore said: “The man went into the victim’s home without her permission and refused to leave when she told him to.

“She didn’t want to sell him any of the items but the man ignored her and took them anyway.

“He preyed on the vulnerable nature of the victim to get her valuable family heirlooms for a fraction of their value.

“We need to track this man down because he may have already targeted other vulnerable people and is likely to claim more victims unless he is stopped.

“We need to speak to anyone in the area who may have seen the man, knows who he is or where he could be. If you have any information at all, please contact us.”

Anyone with information should email 101@sussex.pnn.police.uk quoting serial 110 of 19/09, call 101 or contact the independent charity Crimestoppers anonymously on 0800 555111.