Tesco Express in Brighton’s Jubilee Street has been evacuated after storm water caused the roof to collapse. 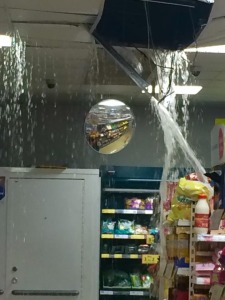 Cat Smith, who sent us these pictures, said she was kept inside for 20 minutes from 6.15pm before being able to escape the flooded convenience store.

She said: “I was just holed up in Tesco on Jubilee Street after the rain caused the ceiling to collapse!

“It was just a trickle to start with then started pouring and got heavier and heavier and then the ceiling just caved and so much water came through.”

Many areas of the city are currently experiencing flooding due to the severe downpour.

It says bands of rain will hit Sussex and Kent throughout the night with up to 3cm of rain forecast.

At 6pm, Brighton Lifeboat was called to a swimmer in distress by the Palace Pier, and searched the waters there before being informed the swimmer was safely back on shore.

Meanwhile, people have been tweeting about the worst-hit areas, which include The Level and Lewes Road:

Heavy flooding on the #A27 between #Lewes and #Brighton. Slow down. #drivesafe

Staff trying to stem flow through ceiling as #BrightonFashionWeek goes on upstairs! pic.twitter.com/fXDBLJZuBA