A retired teacher from Hove has received the British Empire Medal that she was awarded in the Queen’s Birthday Honours List.

Elaine Evans, of Reynolds Road, Hove, was honoured for services to the arts in East Sussex.

She was presented with her medal this morning (Thursday 23 October) by the Lord Lieutenant of East Sussex Peter Field on behalf of the Queen. 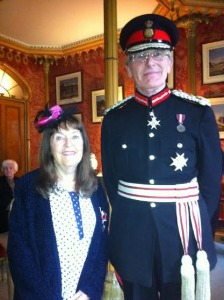 Mrs Evans said: “Peter is one if the trustees of the foundation and I’ve been bringing people here on tours for more than 40 years. It feels like family. And this is Brighton. It’s amazing.

“It’s like a fairy tale in this beautiful room with an award I never expected I’d get. I am a royalist. It’s importance to me is great. I feel immense pride.”

Mrs Evans is also a member of Hove Civic Society, supports of the Actually Gay Men’s Chorus in Waterloo Street in Hove and sits on the Brighton and Hove Commemorative Plaque Panel.

The Lord Lieutenant said: “Elaine is an ardent supporter of the Royal Pavilion and Museums Foundation.

“Driven by her passion for local history, her philanthropic relationship with the organisation began in 2008 and in the following year she became a founding member of their ‘patrons’ scheme.

“As a high-level patron, she provides vital sustained support to the Royal Pavilion and Museums and the cultural life of the city.

“Besides her active involvement with the Royal Pavilion and Museums, she is a long-standing committee member of the Hove Civic Society.

“Over the past 10 years she has written many articles on local history and archaeology and interviewed historians, academics and architects to capture and share their stories and expertise.”

After presenting Mrs Evans and two recipients from Hastings with their medals, Mr Field said: “Their stories are an example to us all of what volunteering is all about and they are worthy recipients of the British Empire Medal.”