Campaigners hold rally in Brighton to try to save Hippodrome

Protesters and political candidates gathered at the Save Our Brighton Hippodrome rally yesterday (Saturday 8 November) to challenge plans to develop the historic theatre venue.

Our Brighton Hippodrome (OBH) organised the event as part of its campaign to present a viable alternative to plans passed by Brighton and Hove City Council for a multiplex cinema and food complex.

OBH campaigner Paul Zenon said in a speech by the Max Miller statue in New Road that the protest showed the strength of feeling about the Hippodrome among residents.

Mr Zenon said: “Brighton really doesn’t need another multiscreen cinema and I think that’s a smokescreen for the food and retail outlets anyway. 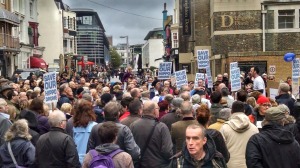 “Now there is a serious alternative to another faceless big business complex on the table.”

The Hippodrome in Middle Street was designed in 1901 by Frank Matcham, the English architect behind the London Coliseum and Victoria Palace.

It hosted the Beatles and the Rolling Stones, among many other acts, before closing in 1965 and reopening as a bingo hall until 2007.

Four months ago, in July, the council agreed to the cinema and retail proposal by Alaska Development Consultants, just days after the Theatres Trust labelled it the most at-risk theatre in the country.

Former Brighton Festival director Gavin Henderson called the campaign’s first meeting and since then its petition has received more than 12,000 signatures.

Professor Henderson said yesterday: “The management at the Theatre Royal would happily take on the Hippodrome. We must convince the council. They are after the funds to develop.

“I think what is wonderful is people aren’t prepared to sit back and say the decision has been taken.”

Councillor Phélim Mac Cafferty, chairman of the council’s Planning Committee, said previously: “If a viable theatre proposal comes forward in the future the conversion is designed to be reversible.” 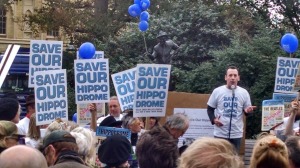 The Save Our Hippodrome rally – Picture by Philippa Hammond

But the OBH website said that plans to demolish the stage, fly-tower, backstage facilities, stalls and orchestra pit were not reversible and should consider English Heritage requirements to preserve the Grade II listed building.

David Fisher, leader of the OBH campaign, said: “We clearly have an alternative that puts the venue to its true use.

“There’s no point sending angry emails to the council. We must work with them. We hope to be their partners in future.”

Many at the campaign stressed the unique potential of the venue to host ballet and lyric theatre and become a conference and digital tech hub in the region.

Clarence Mitchell, the Conservative parliamentary candidate for Brighton Pavilion, said: “Rest assured I am telling my colleagues on the council to back this. The Hippodrome can bring together all of Brighton’s main economies.”

Jeremy Gale, Liberal Democrat council candidate for Central Hove, said: “You have our full backing. We want to see this magical venue brought back to life for generations to come.”

Many protesters said that they rallied because of the Hippodrome’s history and performers such as much-loved Brighton comedian Max Miller.

John Henty, a member of the Max Miller Society, said: “For Max Miller, the Hippodrome was Mecca.

“Without venues like this, people just go up to London for shows.”

In 2012 a proposal to turn the Hippodrome into a music venue by entertainment company Live Nation petered out despite expensive structural reviews.

Averil Older, who chairs the Max Miller Society, said: “We have got a lot of backers and support now and although older people don’t have Facebook, they have memories.

“We have already lost the Astoria.”

Plans to convert art deco Astoria cinema building into offices and flats were approved by the council in August.

The OBH petition can be found here.

The Alaska Development plans can be found here.