A World War One army document was found by a man in Hove Park on Armistice Day (Tuesday 11 November).

The man found the document and a RAFA badge at about 10am and handed them in to Hove Police Station – at the town hall – on the same day.

The army document is an officer’s record of service for Brighton-born Joseph Cunningham who served in both the First World War and the Second World War. 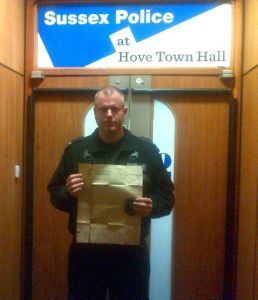 It contains a huge amount of information on his past and how he rose through the ranks to become a major while serving his country.

The document also shows that Major Cunningham was married and had two daughters.

Inspector Jon Carter said: “Thank you to the man who handed these items in.

“We would really like to reunite them with their owner.

“We think they were probably lost in the last couple of days, around the Remembrance Day commemorations.

“Please get in contact if you know who has lost them.”

The owner or anyone who knows the owner’s identity can phone Sussex Police on 101 or email 101@sussex.pnn.police.uk.