The Saltdean Lido has been given £49,500 after a public vote run by the television company ITV.

The Lido won the money on the People’s Millions, an ITV programme produced in conjunction with the Big Lottery Fund.

The Saltdean Lido Community Interest Company (CIC) said: “The £49,500 will enable us to get the children’s paddling pool open for next summer.”

The paddling pool has been filled with stones for the past 17 years.

“This is an amazing boost to the project as we have secured funding for the main pool so will be able to have both open next year. 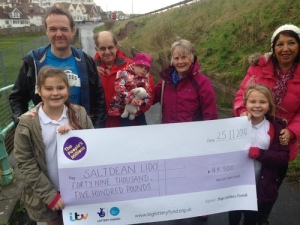 “A massive thank you to all the volunteers who campaigned in the rain, everyone who voted and all the great support from social media.

“You are all amazing and we couldn’t do it without you – a real people power effort!”

Campaigners said that they still had a long way to go before they hit their overall fundraising target of £10 million to renovate the entire site.

Saltdean Lido CIC director Bridget Fishleigh said: “Thank you to everyone who voted by phone and to all the volunteers who were out in the rain over the weekend and on Monday drumming up support.

“Of course, £50,000 is a fabulous amount to win and, when added to the £440,000 we recently secured from the Social Investment Bank, means that both the paddling pool and the main pool will be open next summer.”

The campaign was supported by Simon Kirby, the Conservative MP for Brighton Kemptown, whose constituency includes Saltdean. He emailed more than 10,000 people in the area, urging them to vote for the Lido, and reached 8,000 people using Facebook.