A chalice has been recovered by police in Brighton and they are now trying to trace its owner.

Officers believe that it may have been taken from a church or similar establishment. 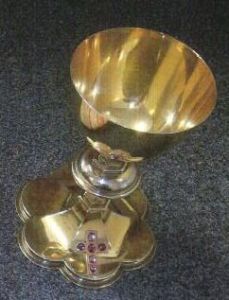 Sussex Police said: “The yellow metal chalice, which has purple beaded jewels on it in a cross shape, was found in a car when officers stopped it in Dyke Road, Brighton, on (Saturday) 13 September.

“A 63-year old Horsham man was arrested on suspicion of dishonest handling and possession of an offensive weapon – a lock knife.

“He is currently on police bail until (Wednesday) 17 December while inquiries continue.”

PC Kathryn Waterman said that the owner or anyone who knew the owner’s identity should phone Sussex Police on 101 or email 101@sussex.pnn.police.uk.

Boy, 5, knocked over by ambulance outside Brighton hospital