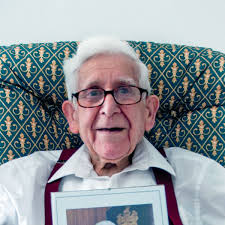 The former Royal Navy officer was reported missing from his nursing home, in Furze Hill, Hove, where he lived with his wife Irene.

On his return he was made an honorary alderman of Brighton and Hove. The award also recognised his long service as a councillor, including eight years as leader of the old Hove Borough Council and a term as mayor.

Tributes were led by Amanda Scott, managing director of Gracewell Healthcare, which runs the Pines. She said: “Bernie caught the world’s imagination last year when he made his ‘surprise’ trip to France and brought a huge amount of joy to a lot of people.

“He will be much missed by everyone here and our thoughts and prayers go out to his wife.

“Bernie was always insistent that what he did during the war was nothing unusual and only what many thousands of others did for their country.

“That may well be true but the little bit of excitement he gave everyone last June was typical of his no-nonsense attitude to life and is how he will be remembered by thousands of people.”

Mr Jordan died in hospital over the festive break.

So sad to hear that Bernie Jordan has died. He rose to national fame during the DDay commemorations last year: http://t.co/VeBSmdUIhe