A miniature Brighton and Hove Bus is being put into service delivering books to children at Mile Oak Primary School this week. 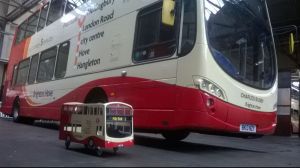 The wooden bus is one of a fleet of four originally created by a friend of the school, Peter Coleman and lovingly renovated by the bus company’s engineers for the school.

As part of its revamp it has been painted in Brighton and Hove Bus livery, given working lights and a display board. Another is being named after Mr Coleman, who sadly passed away in 2011.

On Friday, two of the buses will be presented to the school at a celebratory event attended by Mr Coleman’s widow Anne, representatives of Brighton & Hove Buses and Michaela Morgan, author and reading patron of the school.

Bus driver and Mile Oak Primary School parent Sam Heselden has led the initiative along with the school deputy head Martin Cooper. Sam is part of the bus company’s diversity group; a group working to change perceptions about gender stereotypes in the industry.

Martin Cooper said: “I am staggered by the efforts Brighton and 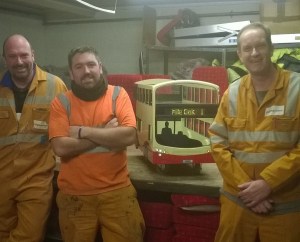 Hove Buses have gone to on our behalf. The buses are spectacular and I look forward to seeing the faces of the pupils when they are presented with them”.

The bus was designed and renovated by  engineers Nathan Enticknapp and Steve Boreham, as well as Frank Clasen, Gethin Donaldson and Dave Ireland – all dedicating their own time to complete the bus builds.

Brighton and Hove Managing Director Martin Harris said: “Our staff have really enjoyed getting involved in this project and have done a brilliant job. It’s great to be able to give something back to the communities in which we serve”.

Along with this initiative, Brighton and Hove Buses have also sponsored the school’s Maths Champions and provided learning materials which incorporate education about public transport.