Writers for a long-running Brighton satire and comedy show took time out to show solidarity with journalists and cartoonists at the French magazine Charlie Hebdo. 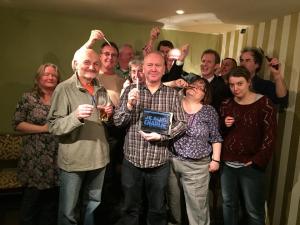 Treason Show director and star Mark Brailsford posed with a “Je suis Charlie” sign, using his iPad, at one of the show’s regular writers’ meetings.

It was held six days after 12 people were killed by gunmen at the Charlie Hebdo offices in Paris.

The next Treason Show will be staged at the Rialto on Thursday 29 January and at the Ropetackle in Shoreham the next night.