Brighton suburbs to get better buses 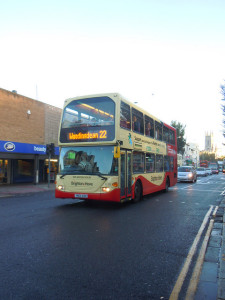 The number 22 bus to Woodingdean by Matt Davis on Flickr

Last year, Brighton and Hove Buses made several changes to bus routes serving Hollingdean and Woodingdean as part of a tweaks to the winter timetable.

Now, more changes are to be made or considered after residents of both areas complained they were worse off than before.

Hollingdean residents were unhappy when the 50 service ran into the city centre less frequently and stopped short of Brighton Station during the day.

After pressure from the Hollingdean local action team, led by Councillor Jeane Lepper, Brighton and Hove Buses now plans that from April five buses an hour will run again from Hollingdean to the city until mid-afternoon on weekdays. Buses will also continue to Brighton Station for an hour longer in the mornings, until 9.15am, so that people can use the service to catch off-peak trains departing after 9am.

Tracey Hill, one of Labour’s local election candidates for Hollingdean and Stanmer who helped publicise the meetings, called for more feedback after the changes.

She said: “The 50 is vital for people in Hollingdean who would otherwise be cut off from the rest of the city. These changes are positive but there are still some who will be disappointed that the 50 no longer goes to Brighton Station all day, as people who are ill or disabled have said that having to change buses makes the journey a lot more difficult.”

Brighton buses managing director Martin Harris said: “Engaging with the community through the work of Councillor Lepper as chair of the Local Action Team has led to improved frequencies during the middle of the day and extra journeys to the station in the morning. This is a very good outcome for everyone concerned.”

Meanwhile, a review of the number 2 and 22 routes serving Woodingdean is to be launched with a public consultation on how the routes and reliability can be improved.

Mr Harris said: “Engaging with the local community is an important aspect of partnership working that we  are very committed to.

“There will still be choices and decisions to be made but working with the community generates new ideas and options to consider, and helps us make better informed decisions with a better understanding of how those decisions affect the people living in the communities we serve.”

Brighton Kemptown MP Simon Kirby welcomed the news. He said: “Having repeatedly raised the issue of bus services in the area, particularly for Woodingdean, I am delighted that Brighton and Hove Bus Company have decided to review these routes and will be looking into how the reliability can be improved.

“I hear from constituents in Woodingdean almost weekly regarding their bus service, and I am so delighted that the Bus Company will be looking into fixing this long-standing problem.

“This is fantastic news for the people of Woodingdean who rely on the bus services.”