The University of Brighton is planning on opening a new campus at a key site in Horsham. 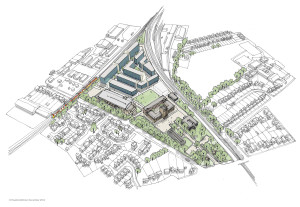 An artist’s impression of the new Horsham campus

The university has entered into negotiations to buy the former Novartis site in Wimblehurst Road.

It estimates the centre could create an estimated 2,250 new jobs and bring £1.7bn of investment to the region over 10 years, and provide around 3,500 places for students.

One of the key attractions for the site is its proximity to Gatwick Airport which makes the area very attractive to international students.

It also provides a very high quality location and facilities which the university aims to exploit to support small business start-up and growth, particularly around biotechnology and biomedicine.

The university’s Vice-Chancellor Professor Julian Crampton said: “Discussions are at an early stage, but if the sale goes ahead, we plan to open an innovative, high-quality centre for higher education that will give a major boost to jobs, skills and business opportunities in the Gatwick Diamond area.

“We will be working closely with Horsham District Council and the Coast to Capital Local Economic Partnership, as well as local business, schools and colleges, to ensure our plans develop in a way that benefits the local economy and the local community.”

A Novartis spokesperson said: “We are delighted to be able to confirm that we are entering into exclusive negotiations with the University of Brighton for the sale of our former Horsham site at Wimblehurst Road.

“This is still subject to the usual negotiations when trying to agree a contract, but the University’s proposal offers an exciting opportunity which could bring long term benefits to the town and local residents, as well as realise our ambition in leaving a scientific legacy at the site.

“We will now work closely with the University and Horsham District Council to try to make this happen.”

Cllr Ray Dawe, Leader of Horsham District Council said: “A university on the former Novartis site would be a fitting legacy for one of the largest healthcare groups in the world, and would bring a new dimension to what our district has to offer.

“A university would hold a prominent role in the community and would add significantly to the economic growth, job creation and skills development across the district and would greatly support the 75,000 businesses and enterprises that already exist within the Gatwick Diamond.

“We already know that we lose many students to higher education colleges elsewhere so the prospect of retaining our young people in the borough is very exciting.”

Brighton and Hove is best for breastfeeding