A serial burglar has been jailed for more than four years for breaking into a 92-year-old woman’s Saltdean home and stealing hundreds of pounds worth of cash and jewellery.

The vulnerable victim screamed when she walked from her kitchen into her lounge and came face to face with an intruder at 12.40pm on 15 July last year.

She dialled 999 and Feeney, 51, fled from the flat in Lustrells Vale with hundreds of pounds in cash and silver and gold jewellery.

Feeney had broken into her home through the front door and then secured the door with a bolt. Crime scene investigators found his DNA on the bolt and were able to prove it belonged to the burglar.

Feeney, of Stirling Close, London, who already had nine previous convictions for burglary, was jailed for four years and four months after pleading guilty to burglary at Lewes Crown Court on 13 January.

Detective Constable Scott Elmer said: “Feeney left his victim terrified when he broke into her house in the middle of the day.

“He targeted a vulnerable pensioner and left her traumatised by her ordeal. She remained brave throughout the investigation but sadly died in December before she could see justice being done.

“Thanks to good work by crime scene investigators and detectives, Feeney is now serving a sentence of more than four years in prison and cannot cause anyone else further misery.”

The conviction comes as a result of Sussex Police’s Operation Magpie to combat burglary.

Other notable recent successes include: 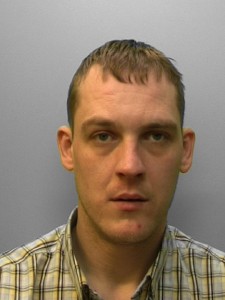 – the jailing of William Cooley, 31, for getting into part of the Hobgoblin pub in York Place twice on 30 November. Cooley, of North Road, Brighton, was jailed for 18 months after he pleaded guilty to two charges of burglary.

– the charging of Dean Vanstone, 46, with handling stolen goods after an Apple Macbook was stolen from a home in De Montfort Road, Brighton, in October. Vanstone, of Bonchurch Road, Brighton, is due to appear at Brighton Magistrates’ Court on 5 February.

– the charging of Alfie Tossell, 19, with a burglary in North Road, Portslade, in August. Tossell, of Ringmer Road, Worthing, is due to appear at Brighton Magistrates’ Court today (29 January).

If you have any information about burglaries or shops selling stolen goods, call 101 or email 101@sussex.pnn.police.uk. For crime prevention advice visit www.sussex.police.uk.

If you see or hear a burglary taking place call 999 immediately.

Residents can also being encouraged to register their items on the world’s largest property database so that if they are stolen, they can be reunited with the owners – and so the offenders can be prosecuted.

You can register your property in just a few minutes by visiting www.immobilise.com. To watch a video about Immobilise and how it works, click play below.