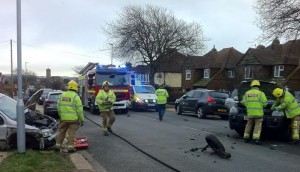 A busy junction in Hove was blocked when two cars crashed as children were heading home from school this afternoon (Friday 30 January).

Neither of the women driving the cars was reported to have suffered serious injuries in the accident which happened just before 3.30pm.

They crashed in Nevill Avenue, Hangleton, close to the corner of Hangleton Road, by the Texaco garage and the Grenadier pub.

Buses and other traffic had to be diverted until the wreckage could be cleared from the road.