Burglars who broke into a house in Brighton stole a number of items and then made off in a car belonging to one of the occupants. 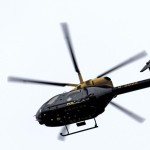 The burglary, in Robin Dene, Whitehawk, was discovered at 12.30pm on Thursday (January 29). Three laptop computers, an iPad Air, camera and case, watch and the keys to a Ford Fiesta parked outside the house were stolen.

The car was driven away and was spotted in the Whitehawk area around 2.40pm. The police helicopter joined the pursuit and it was found in Plaistow Close where the occupants had decamped.

Anyone who witnessed suspicious activity around Robin Dene, saw the silver Fiesta being driven in the area or has any other information about the incident is asked to email 101@sussex.pnn.police.uk or call 101 quoting serial 575 of 29/01. Alternatively, you can call the independent charity Crimestoppers anonymously on 0800 555 111.