A man is in custody on suspicion of drink driving after a crash outside the King and Queen pub in Brighton city centre this morning. 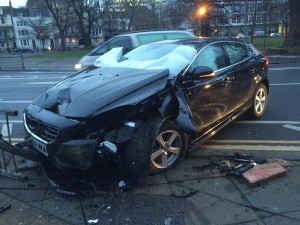 A car crashed after coming off the road at Marlborough Place, Brighton

The black saloon car came off the road and crashed into railings at Marlborough Place this morning.

Sussex Central Road Police tweeted this picture of the car.

A spokesman for Sussex Police said: “At 6.50am police were called to Marlborough Place, Brighton, where a vehicle had crashed into railings outside the King and Queen public house.

“One lane of traffic was blocked until the vehicle could be removed.

“The man who had been driving it was unhurt. No one else was injured.

“A man was arrested at the scene on suspicion of drink driving.”

Two cars crashed in almost the same spot last spring, both damaging parked cars, within six weeks of each other.