A couple’s night out in Brighton ended in violence when a thug broke the man’s jaw and whipped the woman in the face with a belt. 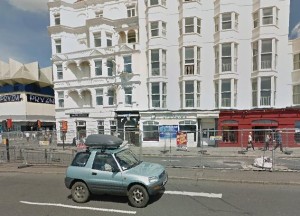 Police are seeking witnesses to the incident in Kings Road, Brighton which happened as the couple walked past the UMI hotel at around 3.30am on Sunday (February 8).

There was an exchange of words with two passers by in their early 20s, both men, one of whom suddenly struck the 19-year-old man in the face.

When his girlfriend, 18, tried to intervene, the same man took off his belt and hit her with it, bruising her face.

A security guard from the hotel helped them inside to safety before they were taken to the Royal Sussex County Hospital, Brighton, for treatment.

The assailant and his friend ran off up Kings Road and into Middle Street, pursued by some of the victims’ friends who had been walking ahead of the couple, but were lost to view down an alleyway

Detective Constable Aaron Halsey, from Brighton CID, said: “This was a nasty assault on two young people who had been enjoying a night out with friends.

“Anyone who saw what happened, or who may have other information that could help identify the suspect, is asked to email 101@sussex.pnn.police.uk or phone 101, quoting serial 211 of 8/2.

“If they would prefer not to leave their name, they can contact the independent charity Crimestoppers on 0800 555 111.”