Brighton and Hove’s green-tiled pubs, early petrol pumps, boundary stones and bollards are set to be added to a list of the city’s historically important landmarks and spaces. 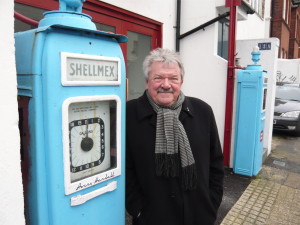 Bill Randall with the 1950s pumps

The city council is seeking public feedback on a draft list of heritage assets proposed for so-called ‘local listing’.

Among them are two defunct 1950s petrol pumps at Bath Street in Seven Dials. The former garage they served is now a private house.

Local listing is distinct from statutory listing – such as Grade one or Grade two – and does not carry the same legal protection. But it does create a record of cityscape features valued by communities and helps inform the council on issues such as planning decisions. It was a factor in preserving the façade of the 1930s London Road Co-op in Brighton, when plans were approved to convert it to student flats.

Also included are many pubs. Among them are two in Hanover – the Horse and Groom, Islingword Road and the Montreal Arms on Albion Hill. These and others on the list feature distinctive green-tiled facades – a trademark of the former Portsmouth and Brighton United Breweries.

Elsewhere are houses, hotels, churches, shops, phone boxes and post boxes. A boundary stone on Elm Grove and a pair of bollards outside St Nicholas churchyard are also proposed. Parks include Blaker’s Park and its clock tower, St Ann’s Well Gardens and Kipling Gardens in Rottingdean.

In 2013 the council appealed to residents for suggestions and 500 were received. There are approximately 170 buildings on the current local list. The new proposed list would include a total of about 250.

Comments are now invited on the draft list which can be seen on the authority’s website – search local listing. Closing date is March 15. No more suggestions can be added for now, the authority stresses.

Lead councillor for heritage Bill Randall said: “Local listing is very important to raise the profile of these assets so everyone is aware of what is in a locality if change is proposed. Otherwise, to quote Joni Mitchell’s song, ‘you don’t know what you’ve got ‘till it’s gone’. The aim is to make sure we know what we’ve got – and then do our best to make sure it stays if it’s valued.”