Police have released this CCTV image of a man they are looking for in connection with a robbery at a Brighton phone shop. 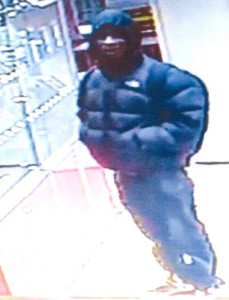 A man went into The Phone Surgery in Trafalgar Street, at 3pm on Tuesday 10 February and asked about buying a mobile phone. He asked to look at an iPhone 4s costing £160 and a grey HTC M8 costing £280. He then put the phones into his rucksack.

When he was challenged by the staff member he said he was just getting his money out to pay for them. He then got a large kitchen knife out of his bag. The staff member tried to keep the door of the shop closed to stop him escaping but he got away and ran down Pelham Street towards City College.

A search of the area was carried out by officers but there was no trace of him.

The suspect is described as black, 5′ 4′ , clean shaven and was wearing a black puffa-style jacket, black hoody, black jeans and black trainers with a white trim around the sole. He was carrying a black rucksack.

Detective Constable Sarah Townsend said: “If you recognise the man captured in the CCTV image or have any information about the robbery, contact police.”