Teixeira scored after eight minutes, linking up well with Joe Bennett. The young Portuguese under-21 international fired a low shot which Birmingham keeper Darren Randolph could only parry into the net.

Just four minutes later and with a certain inevitability, Birmingham equalised as Andrew Shinnies’ centre was stabbed home past the stranded David Stockdale by Clayton Donaldson to level the score.

Either side of this action Albion had chances to score.

Very early on Calderon had a chance to put Albion ahead but scuffed his shot on the edge of the D.

Then Leon Best was put clear from a Bruno Saltor cross but he also scuffed his shot and barely connected as the ball trickled past the far post.

Sam Baldock also had a great chance but fired well wide after getting in behind Paul Caddis.

But a turning point, perhaps in Albion’s season, came just before half time as Stockdale made a super one-handed stop from Donaldson when the latter was clean through.

Then in first-half stoppage time Bruno, after initially losing the ball, up-ended Shinnie and referee Sutton had no hesitation pointing to the spot.

Stockdale, who has received much criticism at the Amex, was equal to Caddis’s penalty and palmed it away brilliantly to his right to keep the Albion level at half time.

Five minutes into the second half Albion were back in front, Baldock crossing the ball into the area and Calderdon sweeping it past Randolph, with a suspicion of offside, from close range.

Albion had their tails up and were not in the mood to let Birmingham straight back again. The Seagulls were playing with a confidence and purpose seldom seen this season.

Bruno, as a tenacious wing back, worked the ball in from the left and less than five minutes after Calderon’s goal, Teixeira buried his second of the match, into the bottom corner, after Randolph had saved from pointblank range from Baldock.

Albion looked firmly in control. Best was replaced by Craig Mackail-Smith whose energy caused the Blues defence some problems.

Gordon Greer was having a fine game at the back and was purposeful when getting forward.

Birmingham substitute Wes Thomas was linking well with Jonathan Spector and it was Thomas, back to goal and grappling with Greer, who pulled a goal back for Birmingham with 14 minutes left.

With five minutes left following a corner involving Bruno and Dale Stephens, the ball bounced around the area and was collected by Calderon who swivelled and fired his second and Albion’s fourth past Randolph to restore Albion’s two goal advantage.

This was crucial as two minutes into the four added on, Lee Novak managed to steer the ball past a collection of Greer, Bruno and Dunk and the dive of Stockdale to reduce Birmingham’s deficit to just one.

Fortunately for Albion, despite forcing Dunk into a superb towering clearance Birmingham ran out of ideas.

The Seagulls move above Rotherham and on to 34 points, just two behind Fulham in 19th place.

Albion take on Leeds United at the Amex this coming Tuesday (24 February). 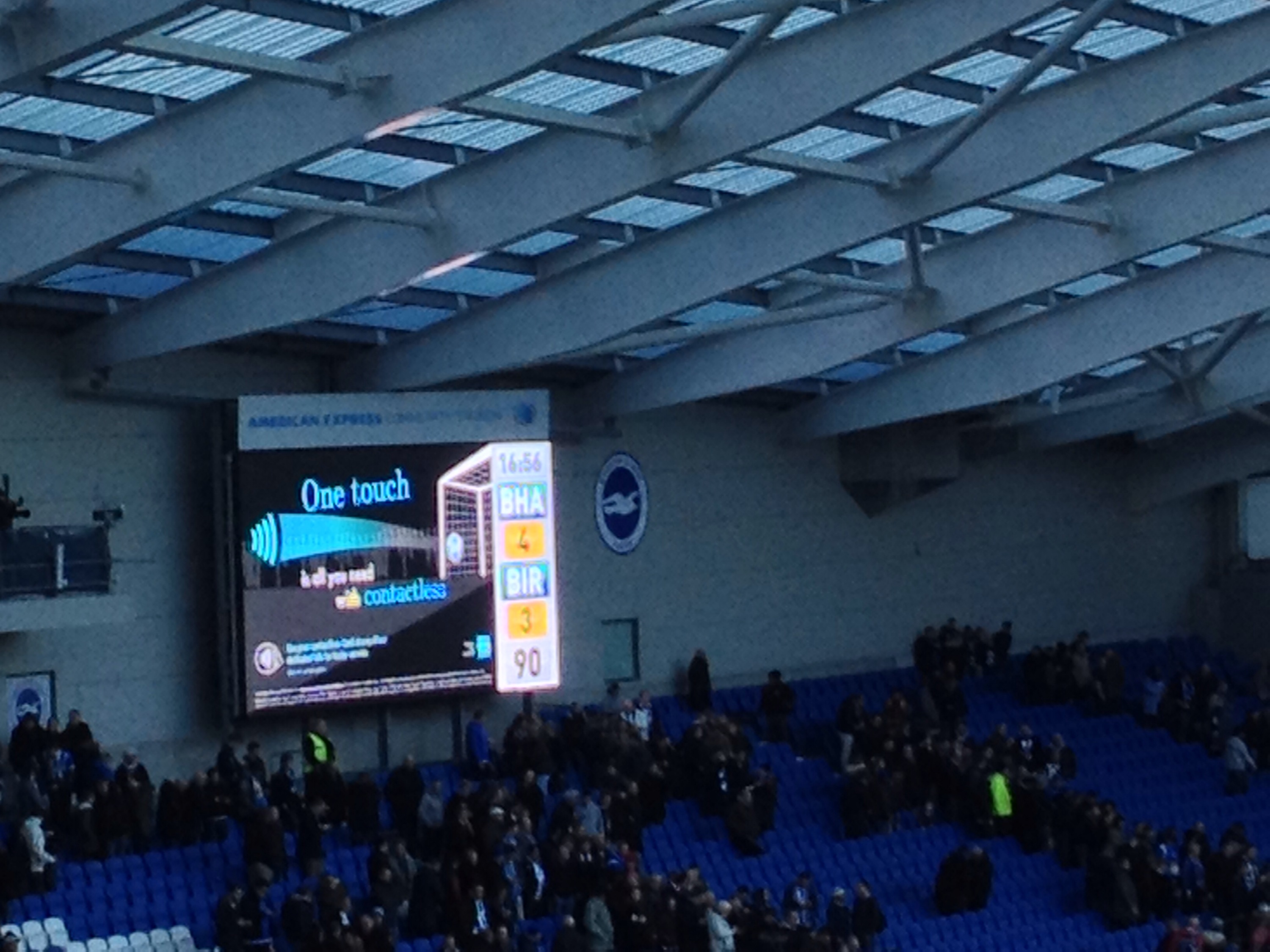