Detectives are trying to track down a man suspected of raping a 15-year-old girl in Hove.

They have published a photograph of the suspect, Obaidullah Shenwari, who is also accused of carrying out a serious sexual assault on a 14-year-old girl. 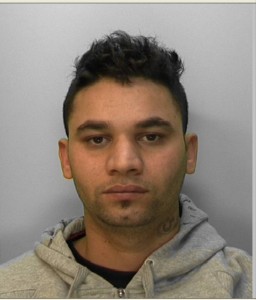 Sussex Police said: “Police in Brighton and Hove are searching for Obaidullah Shenwari, who is sought on suspicion of serious sexual offences against two teenage local girls known to him.

“Shenwari is described as 21, 5ft 7in, of medium build and with a distinctive tattoo of Arabic writing in a scroll on the left side of his neck. He speaks and understands English.

“He is sought on suspicion of the rape of 15-year-old girl and another serious sexual assault on a 14-year-old girl at an address in Hove in June 2013.”

Detective Sergeant Richard Harris, of the Brighton Specialist Investigation Unit, said: “We believe Shenwari, who may up till recently have been elsewhere in the UK, is currently in or around the city.

“If you know where he is, or have any other information that could help us trace him, please get in touch.”

Anyone who can help locate Shenwari is asked to phone Sussex Police on 101, email 101@sussex.pnn.police.uk or call the independent charity Crimestoppers anonymously on 0800 555111.