A car has crashed into a garden wall on Elm Grove this morning. 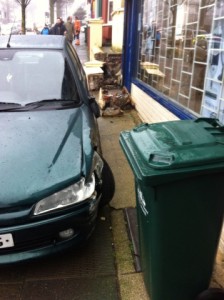 The Peugeot left the road and hit the wall of the house next to the former Vacuum Centre shortly after 7am this morning.

A spokesman for Sussex Police said there were no reports of injuries or arrests and the car was awaiting recovery.

The crash happened just a couple of hours before the pavement is busy with children being taken to Elm Grove Primary School and the Pepperpot Pre-School opposite.

One parent of a child at Elm Grove Primary School said: “Thank goodness no one was hurt, and it wasn’t two hours later at school run time.”

However, schoolchildren were excited to see the car being recovered as they arrived at school.