WITH VIDEO: About 300 riders defied miserable weather to show their support for the Preston Park Velodrome at a Slow Ride this morning. 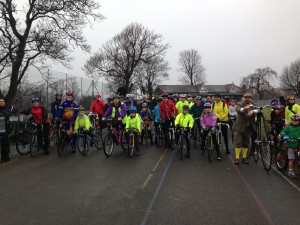 Cyclists young and old riding low bikes, tall bikes and all sizes in between rode sedately around the cycle track, which has been closed for competitive racing.

British Cycling’s surveyors estimate repairing the perimeter fence will cost £300,000, and it is now in talks with the council to see whether they can come up with the necessary funding between them.

“We knew there is good support for the track from social media, but when people show up you know they really mean it.

“All those hundreds of cyclists aren’t going to stop until the track is repaired.”

They were also joined by Labour’s parliamentary candidate Purna Sen, and leader of the Brighton and Hove Conservative group Geoffrey Theobald.