Just a few days after it announced it would march in Brighton next month, the English Defence League (EDL) has apparently changed its mind. 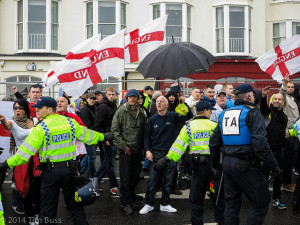 The far right organisation said last week it was planning on holding a national demonstration here on Saturday, April 18.

But today, it announced on its Facebook page that it was postponing the event to concentrate on action in Oxford instead.

It said: “In light of the recent events in Oxford, the English Defence League has made the decision to postpone the planned demonstration in Brighton and announce its intention to demonstrate against the failings of the police and social services in Oxford.”

Brighton anti-fascist group StopMFE were quick to claim victory. On its blog, it said: “In a victory for community-based anti-racism, the far-right English Defence League (EDL) have announced that they have ‘postponed’ (ie cancelled) their planned march in Brighton on April 18.

“It is clear that the threat of a large, diverse counter demonstration from the residents of our city was too much for them, and they have chosen to attempt to march in other cities, that they believe they can bully more easily.

“This victory clearly shows that communities do not have to put up with these racists, and that they will back down if it looks like they will be given a hard time.

“However, StopMfE urges anti racists and anti fascists not to rest on their laurels. The situation could change and we are committed to opposing the EDL if they ever do raise their unwelcome heads in our communities.”