Woman taken to hospital with head injury after crash on A259

A woman pedestrian has been taken to hospital with a head and leg injury after being hit by a car on the A259 coast road. 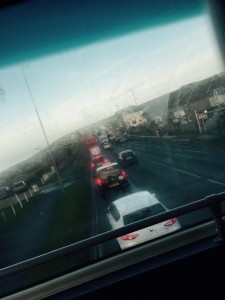 Traffic queueing on the A259 following this morning’s crash. Picture by Al Busby

The crash happened this morning at about 7.46am at the junction of Broomfield Avenue and the South Coast Road in Telscombe Cliffs.