Can you help find Good Samaritans who scared off Brighton mugger as he robbed mother and daughter?

Police are appealing to two good citizens to come forward who intervened when a man tried to rob a woman in Brighton. 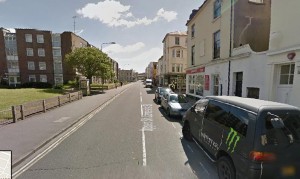 A 41-year-old woman was walking with her nine-year-old daughter on Saturday (March 7) when she was approached by a man who demanded she hand over her phone as she was on Upper St James’s Street at around 7.30pm.

Two men came along and told the man to go away.

Detective Sergeant Kate Witt said: “We are keen to speak to these men who intervened who might be able to help us with our enquiries.

“The man is described as white, 5ft 8in, large with black dirty shoulder length hair with black stubble.

“He was wearing a black puffa style jacket and white, sports style tracksuit trousers with white laces which were being used to hold up the trousers and black trainers.

“Anyone with information is asked to contact police on 101@sussex.pnn.police.uk quoting serial 1395 of 07/03.”