A Brighton market stall which was given zero stars by a hygiene inspector has made major improvements. 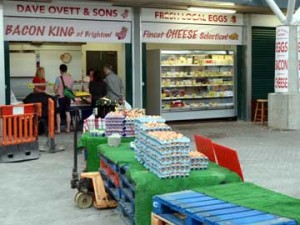 Dave Ovett’s bacon and egg stall in the Open Market was given the lowest rating possible when it was inspected in July last year.

But last month, inspectors visited again and the business has now been given four stars.

Mr Ovett said he was delighted with the new rating, and said the previous inspection had happened during the chaos of the move to the new Open Market.

He said: “We were given a week’s notice to move from the temporary market to the new market.

“We were getting everything sorted out and the water heater failed. The inspector had to give us a zero because the heater on the wall wasn’t working, although we had a supply of hot water.

“Since then, we’ve also had the floor done, and it’s all stainless steel down the wall.

“All our staff are trained and their certificates and now our four stars are all on the wall.”

A council spokesperson, said: “The business was re-inspected on 12 February. Things have greatly improved and the business has been awarded a four on the Food Hygiene Rating Scheme (FHRS).

“The FHRS system has a delay of 28 days from the inspection taking place to the score appearing on the website, as well as taking into account the time to draft and send the letter to the business and 14 day appeal period.

“The business should appear on our website when we do the next two week upload of inspections this Friday.”