A Peacehaven teenager has been arrested after a security alert at Brighton Station this morning. 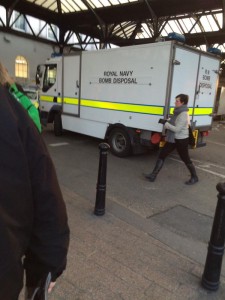 Police had first tried to make contact with the 17-year-old boy yesterday evening after concern was expressed about his welfare, and possible harmful chemicals in his possession.

He was not there, but was later arrested at 3.45am this morning at Brighton Station.

A bag he was carrying was cordoned off and the bomb squad was called.

A Sussex Police spokeswoman said: “Police went to an address in Collingwood Close, Peacehaven, on Wednesday, 11 March at 7.20pm after concern had been expressed for the welfare of a 17-year-old boy living there who was reported to have been in possession of a quantity of chemicals which had the potential to harm him.

“Officers entered the property but nobody was present.

“He was later arrested at 3.45am on Thursday, 12 March at Brighton railway station on suspicion of threats to commit criminal damage and possession of a class A drug.
“A bag he was carrying was cordoned off at the station and East Sussex Fire and Rescue and the bomb disposal unit were called to the scene. 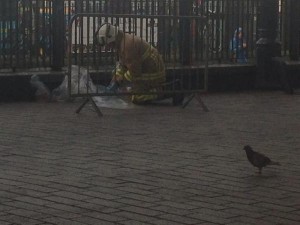 A firefighter at the scene at Brighton Station. Picture by Sebastian Handley on Twitter

“The bag was found to contain some chemicals which were all contained separately and were not mixed or considered to be dangerous. There were no explosives and this is not a firearms or a terrorist incident.

“They have now been removed and the station concourse re-opened at 8.30am. The 17-year-old Peacehaven boy remains in custody.”

Odd to have the Navy bomb squad channelling passengers through one entrance at Brighton station this morning. Know why @SouthernRailUK ?

Bomb Disposal Unit at #Brighton station this morning. Well, that woke me up.