A Brighton landlord made a grim discovery when showing a group of students round his house. 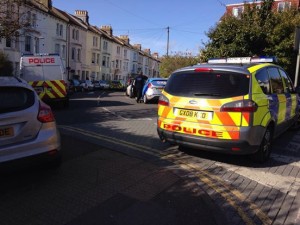 As the man showed the group around the property in Vere Road, Brighton, they found the body of one of the current tenants, 23-year-old Trevor Munyanyi.

The discovery at 1pm on Friday last week, led to the road being cordoned off as Sussex Police attended the address.

Student newspaper The Tab quotes an unnamed student who saw the police cordon.

He said: “I bumped into a friend who was close to the scene. He was part of a group viewing the student house for next year and while being shown around walked into a room with a dead body.

“He told me a girl from the house they were viewing said they had not seen the guy for two days.”

A spokesman for Sussex Police said: “Police were called to a property in Vere Road, Brighton, shortly after 1pm on Friday, March 6, where the body of a 23-year-old man had been found.

“There were no suspicious circumstances but the death is being treated as unexplained while enquiries continue.

“The deceased was Trevor Munyanyi, of the Vere Road address.

“A post-mortem examination has taken place but further tests are needed in order to establish exact cause of death.”