The Green Party published its local elections manifesto – entitled Rejuvenating Our City – this morning (Thursday 26 March). Most of the party’s councillors and candidates gathered at Moshimo – the Japanese restaurant opposite Brighton Town Hall – where they were offered green tea.

Councillor Sue Shanks said: “We’re very proud of our record (but) we’re not going to rest on our laurels.”

And Councillor Phélim Mac Cafferty said: “We need to fight for another four years. We are asking our citizens to cone with us on our journey and vote Green again at the elections on (Thursday) 7 May.”

Councillor Mac Cafferty said: “What city have you been to that’s opened libraries not closed them!”

The party’s manifesto said: “In 2011 Brighton and Hove made history by electing the UK’s first Green-led council. Since then the coalition government has slashed our city’s budget by £80 million – the second-biggest reduction in the south east.

“Despite this, unlike many other councils, we have been able to keep all our services open and attract £86 million of external funding to improve and rejuvenate our city.”

He praised two of his fellow councillors – council leader Jason Kitcat and economic development chairman Geoffrey Bowden – for helping to bring in the external funding.

Since the manifesto was printed a further £10 million has been awarded – £9 million for seafront repairs and £1.2 million for the Boris bikes hire scheme. 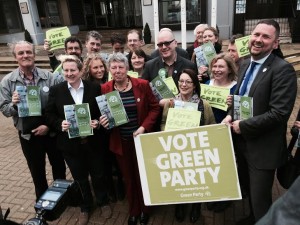 The party spoke up for its record in office and said that it wanted voters to keep faith with its approach. The manifesto said: “Brighton and Hove is in the midst of a transformation. Major regeneration projects such as the Open Market and the award-winning Level are complete with others under way.

“The local economy is outperforming the rest of the country. We are one of the top four UK cities for business start-ups. We have seen 9,000 jobs created and we’re the country’s most popular seaside resort.”

Tom Druitt, chairman of the Brighton and Hove Green Party, said: “Our manifesto has been a huge democratic exercise.” He said that it had involved workshops and full party meetings open to all members.

He said that the manifesto contained 216 pledges, including the completion of policies and projects that were already under way. And he added: “It also reflects a long-term plan. Much has been completed but there is so much more to do.”