The couple behind a growing tea business based in Brighton told the Prime Minister David Cameron about their blend of success at a Downing Street reception this week.

Mike Turner and Krisi Smith were invited to No 10 having benefited from the government’s Start Up Loans programme.

They were among 20 businesses at the reception, chosen from more than 27,000 businesses up and down the country which have been loaned more than £140 million under the scheme.

Their business – the Bluebird Tea Co – has led to the creation of 15 jobs including an apprenticeship. 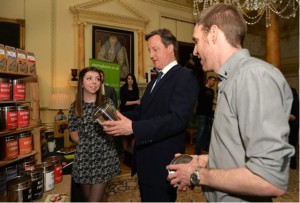 They have a shop in Gardner Street, in the North Laine, they have plans to open a second shop and they are exporting tea abroad through their online store.

Mike Turner said: “It was great to visit No 10 and get the opportunity to show the PM our passion for creating amazing blends of tea.

“He seemed excited hear that we we’re just a young couple who created a business from scratch and have created 15 local jobs, including a successful apprenticeship, just 18 months later.”

Mr Cameron said: “Small firms play a huge role in the economy and are absolutely key to delivering our long-term economic plan.

“Supporting new companies as they get off the ground creates jobs and opportunities for hard-working people.

“That’s what our Start Up Loans are all about – giving people who want to work hard and get on the tools and confidence to turn their entrepreneurial vision into a reality.”

The couple said that the Bluebird Tea Co was Britain’s first tea company specialising in tea mixology. They create blends of loose leaf tea, all hand blended in the UK.

As they prepare to celebrate the first anniversary of their Gardener Street shop, they are also looking forward to the Brighton and Hove Food and Drink Festival.

The Bluebird Tea Co will be among those taking part in the New Road street market on Good Friday (3 April) and the next day from 10am to 5pm.