Robbers steal thousands of pounds from Harry Ramsden’s in Brighton

Robbers stole thousands of pounds from Harry Ramsden’s in Brighton at about 8am this morning (Monday 6 April).

Sussex Police said: “Detectives are appealing for information about a robbery at a fish and chip shop in Brighton.

“Officers were called to Harry Ramsden’s in Marine Parade, Brighton, around 8am where two men had forced the back door.

“The manager was in the restaurant and was forced to open the safe and the men stole money, believed to be several thousands of pounds.

“They then left via the back door.” 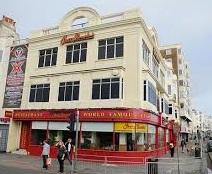 Detective Sergeant Cheryl Lewendon said: “The manager thankfully was uninjured and was able to raise the alarm.

“The suspects are described as white men who spoke with foreign accents. They were both wearing balaclavas, dark jogging bottoms, black jackets, one with a high vis over the top.

“It was a busy time in the morning due to deliveries in the area and we are eager to speak to anyone who witnessed anything suspicious.”