A beautiful art-deco home on the row of houses where Fatboy Slim, Zoe Ball, David Walliams and Adele live has come on the market – for just £4 million. 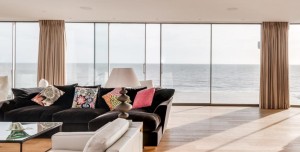 The stunning beachside property is being sold by Malcolm, a retired Harley Street doctor who has renovated it to make the best of its sea views.

He told the Mail that since moving there five years ago, he has had many encounters with his celebrity neighbours.

He said: “[Adele] has this lovely little dog and, in the summer, when all the doors are open, the dog wanders into my house and she comes round to find it.”

He said he had also bought a bunch of flowers for actor David Walliams and his then-girlfriend Lara Stone, and tried and failed to sell some of his vinyl to Fatboy Slim, who owns three of the eight houses in the row.

But he says the main attraction of his home is not the neighbours, but the “wonderful, ever-changing views” of the sea, and the private beach leading up to it.

To have a sneak at more pictures of the house, click here for agents Brand Vaughn’s brochure.