Brighton & Hove Albion: Seagulls are toothless up front as Cherries pick a great time to score

Albion were given a harsh lesson in finishing and discipline as Bournemouth, the surprise package of the Championship, beat them with two quality goals at the Amex.

Albion failed to muster a single shot goalwards in the first half. The industry of Dale Stephens and Joao Teixeira was wasted by the reluctance to commit players forward.

Although the Seagulls did peg the Cherries back in their own half for long periods of the first half, it was Bournemouth who had the two best chances. Both of these fell to Matt Ritchie.

The first one had the sting taken out of it by fellow attacker Callum Wilson and dropped tamely into the hands of a grateful David Stockdale. Then Ritchie took a pass from Wilson but fired over.

Albion appeared just on top at the end of the first half and at the start of the second period. Stephens had two chances in quick succession but fired over on both occasions. Not long after Leon Best was clean through but shot tamely at Arthur Boruc. Best almost toe-poked the ball to the Cherries on-loan keeper.

Albion’s most exciting chance fell to Mustapha Carayol. He ran with the ball from inside the centre circle but had his shot charged down in the penalty area. It was almost remimiscent of the mercurial Vicente Rodriguez a couple of years ago against Derby.

Bournemouth’s opener came from a free kick given away by Lewis Dunk.

Ritchie, Andrew Surman and Yasan Kermorgrant all stood over the ball but it was Kermorgrant who flicked the ball from right to left, up and over the flat-footed Stockdale who chose to take a couple of steps to his left at the wrong time.

Bournemouth’s second came from another Dunk mistake although Craig Mackail-Smith was more culpable. On as a substitute, CMS attempted to back-heel the ball to Dunk. But this caught Dunk out and the ball was brilliantly lofted up towards Wilson by Kermogrant. Wilson turned Halford inside out and shot low past the already committed Stockdale.

After this Albion offered nothing except Mackail-Smith’s hopeful angled punt from outside the penalty area.

The Seagulls must realise that they are now firmly back in a relegation scrap. Millwall take on Watford tomorrow (Saturday 11 April) and could move within six points of the Seagulls with a game in hand.

This evening’s performance (Friday 10 April) was too much for many of the official 25,919 crowd to bear. Many left well before full time and the stadium looked almost empty in places.

After the match former Seagulls defender Ross Johnson told Brighton and Hove News that he was concerned by Albion’s attacking options and how many times they passed the ball backwards.

He also commented on the loan players being out of match practice and not perhaps bonding with their team mates, adding that Bournemouth had a great team spirit . 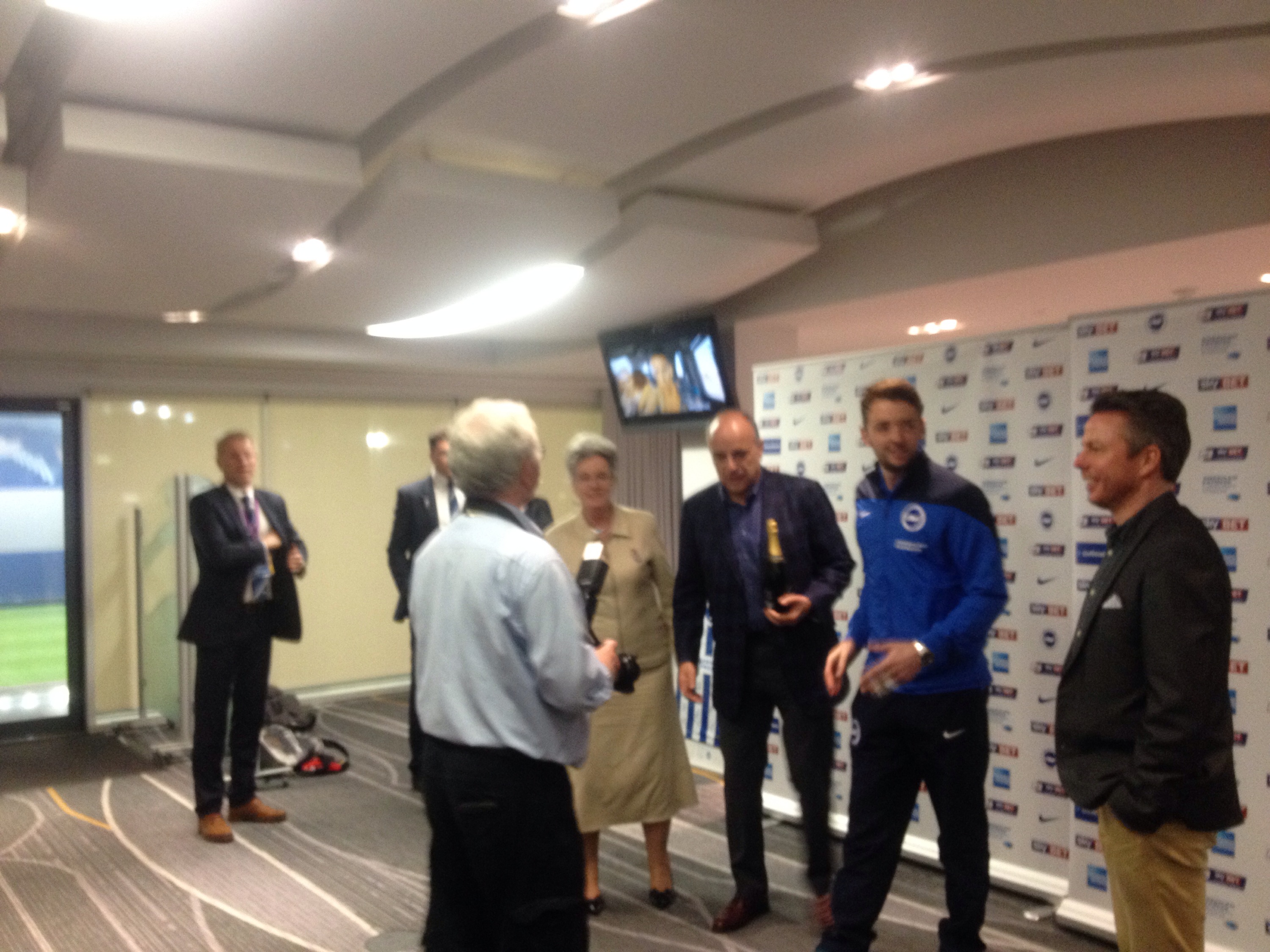 Dale Stephens eventually picks up his Man of The Match award at subdued Bupa Lounge.