A Brighton and Hove bus has been given a gargantuan arty makeover as part of this year’s Brighton Fringe. 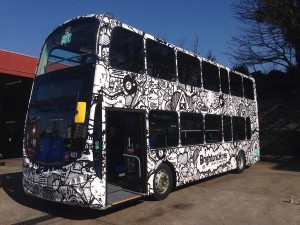 “Get On. Go Somewhere.” celebrates the role of the bus in the city’s creative and cultural life, and was inspired by Brighton’s North Laine.

It was commissioned by Brighton and Hove Bus Company and designed by a team of three creatives based in the city.

The piece started life as an ordinary double-decker bus, and has been completely transformed – not only the exterior but also inside, floors, ceilings, lighting and seats.

It is covered with original work by Brighton’s iownthisart, one of the Brighton’s most exciting artists, who says he takes his inspiration from living and playing in such a creative city. 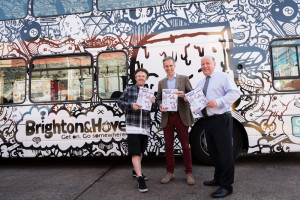 Jason’s very stylised and accessible work is becoming well known in Brighton, and features in some of the city’s arty hotels, pubs and cafes such as the Marwood coffee house and Hotel Pelirocco.

Bringing it all together has been a fascinating challenge for the team in Brighton and Hove Bus Company’s body shop, led by Frank Clasen.

The exterior is covered in stylised, monochrome drawings. Inside, multicoloured lighting has been created using coloured gels.

There is quirky artwork on every available space including across the ceilings. The flooring has been replaced with a mini-cobbles design.

All seats have been reupholstered in a jumble of colourful highly patterned vintage bus and train seat fabrics, that Chloe describes as “a punchy and perhaps familiar mix of abstract vintage fabrics”.

Fringe Director Julian Caddy said: “We are delighted with this unique addition to the Fringe programme. I love the way this work represents the city’s independent creative spirit – and it has a fantastic practical application as it will be used for performances and travel during the Fringe.”

Brighton and Hove Bus Company’s Managing Director Martin Harris said: “We’re strong supporters of Brighton Fringe and we know that our buses take people to some amazing cultural events – not just in May but throughout the year.

“So this year we really wanted to do something that would be integral to the spirit of the Fringe and also celebrate the way buses are part of people’s cultural experiences in our city.”

“Get On. Go Somewhere.” will be part of Fringe City, every Saturday during the Fringe. It will be located next to the Spiegeltent on 2nd, 9th, 23rd and 30th and there will be free performances on the top deck during the afternoons.

On 16 May, it will be in New Road for sessions for kids with iownthisart such as sticker making, or bring along items to be ‘inked’ by the artist.

On Saturday evenings in May, it will cruise between Brighton Station and Fringe venues, and anyone with a ticket to a Fringe event that night can hop on for a free ride.

From this week and throughout the Fringe, “Get On. Go Somewhere.” will make surprise appearances on bus routes across the city, giving as many locals as possible the chance to experience the artwork for themselves.

To book tickets to Brighton Fringe visit brightonfringe.org or call 01273 917272.