An incense stick has been blamed for setting a Brighton bedroom on fire yesterday evening. 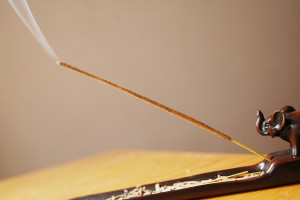 Picture of an incense stick by nyuhuhuu on Flickr

Firefighters from Preston Circus were called to the blaze in Newhaven Street at 8pm, but the fire was out on arrival.

Crews used a PPV fan to clear the smoke.

The fire is believed to have been started by an unattended incense stick.