Family cat doused in petrol after prowl round Hangleton

A Hangleton family were horrified when their cat returned home after an evening prowl doused in petrol. 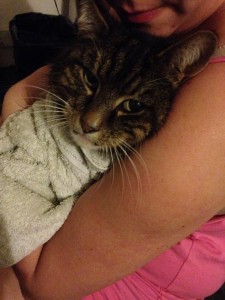 Jess Doughty’s puss Boots came back to the house in Amberley Drive at about 10pm on Tuesday dripping with the flammable liquid.

Boots has since made a good recovery, but police are concerned the outcome could have been much worse, and are appealing for anyone with information about the incident to come forward.

Jay said: “This cat is the most laid back cat you will ever meet. I don’t understand what goes through some sick people’s heads.

“I’m so angry. We gave him a bath and luckily he’s okay, but I can’t bear to think what could have happened.”

Her daughter Jess said: “I would hate it to happen to someone else’s pet and they not be as lucky as Boots was.”

A police spokesman said: “A cat returned to its home in Hove on Tuesday night (April 21) doused in petrol.

“Its shocked owner discovered the cat at her home in Amberley Drive around 10.15pm. It had been out since about 8pm.

“The cat was ‘a bit spooked’, but was cleaned up and appears none the worse for its experience.

“However, police are concerned that the outcome could have been much worse and want to hear from anyone with information about the incident. Email 101@sussex.pnn.police.uk or call 101 quoting serial 1743 of 21/04.”