Brighton commuters were stuck on a stopped train for more than four hours after an electrical fault at Clapham Junction brought services to a standstill. 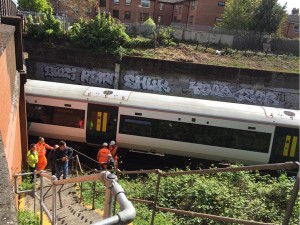 Southern services in and out of London Victoria were cancelled after the power failed shortly after 8am this morning.

Some trains at Clapham Junction were evacuated, but some services, such as the 6.56 Brighton to Victoria, were stuck outside the station with passengers on board.

The train finally started moving again at 12.30pm, and reached Wandsworth at 12.45pm.

Passengers on the Brighton train were tweeting since it stopped at about 8am.

Train being towed to Wandsworth Common. They’ve run out of water and paramedics are on board #ClaphamJunction

If you are stuck on a train then @btp & @networkrail are on scene and will evacuate you as soon as they safely can. #claphamjunction

A BTP spokesman said: “We are currently working to ensure passengers are safely taken off a number of stalled trains as a result of ongoing electrical supply problems between Wandsworth Common and Clapham Junction.

“We are working with colleagues from Network Rail, Southern, London Fire Brigade, Metropolitan Police Service and London Ambulance Service to resolve the situation, which was first reported shortly after 8am.”

“Engineers are on site and we aim to resume services as quickly as possible.

“Tickets are valid on all other routes into London and Southern passengers are advised to avoid travelling through Clapham Junction, which is very busy. We are very sorry for the disruption to people’s journeys today.

“South West Trains services to and from Waterloo via Clapham Junction are unaffected but busy.”

“We had to evacuate passengers from one stranded train with the assistance of the emergency services.

“Passengers have been incredibly co-operative and calm and we thank them for their help and understanding in what has been a very difficult morning for them.”

“Engineers are on site and we aim to resume services as quickly as possible.

“There is a very limited service into and out of Victoria and we are advising people not to use the station but to use other train operators. Southern tickets are valid on all other routes into London.”

Checked trains before I left the house: all running fine. Get to Brighton Station 10 mins later: all hell has broken loose. — Anna Cowdry (@foodinbrighton) April 30, 2015

National Rail said the problems were causing delays of up to an hour between Clapham and Balham.