A new Brighton councillor has kicked off his first term of office with a petition calling for the release of data about the impact of the changes to Lewes Road. 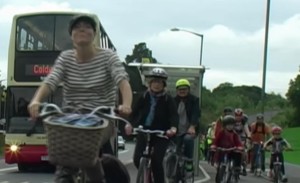 Daniel Yates, who was elected to represent Moulsecoomb and Bevendean and is now the Labour group’s health chief, is asking for the release of all monitoring documents produced since November 2013 with data about air quality, health, travel times and accident rates.

He is also asking for the council to consider time restricting the bus lanes and introducing measures to lessen any impact on surrounding roads.

Coun Yates said: “I think it’s crucial that local people are able to fully demonstrate their views on this. I could have simply requested a report but local feeling run very high over the Lewes Road scheme and it’s important for people to be able to show their support for this.

“The Lewes Road scheme and its impacts were mentioned by probably 75% of all those thousands I spoke to during the campaign and its impacts are felt across a range of wards. This is a chance for all those residents to have their voice.

“I’m not egotistical enough to think that I am the council. I’m more than happy to prove that I want to hear the views of residents more than once every four years.”

This use of the council’s e-petition service by a councillor is a novel one. Current guidance states that councillors are not allowed to sign petitions – however, it does not prevent them starting one.

The tactic is supported by the Labour group, with a spokesman saying: “The previous Green administration reneged on its own commitment to monitor the scheme after six months of going live. Dan, as a concerned ward councillor, is ensuring that it’s being done.”

The petition was launched on Friday and at the time of publication, it had been signed by 91 people.

However, it has been slammed as an unnecessary, ill-informed waste of time and money by the Greens, who originally implemented the scheme.

Convenor Phelim Mac Cafferty said: “The Lewes Road scheme is innovative and forward-thinking. It was widely supported in one of the biggest and most in-depth consultations ever conducted in our city.

“It continues to be subject to extensive ongoing monitoring and by all measures, it’s been a success.

“There is no significant displacement of traffic to other routes and significantly, air quality, dire for so many years along this road, is finally showing improvement.

“This is what we promised and what has been delivered. It is good news for our city and for the health of our residents.

“The improved Lewes Road will help the city to keep moving into the future, as the number of residents and visitors continues to grow.

“The next monitoring surveys will be carried out this autumn, to enable comparisons with data collected in November 2012 and 2013 and I will be as interested as anyone to see the results.

“It takes time to fully understand the impact of a large scheme like this. However by no measure, to date, can it be shown to have failed or there to be any justification for a review.

“This would be an utter waste of officer time and incredibly limited city council funds.

“Also what sort of message would it send if we were to reverse this work that was paid for by the Department for Transport? They would think long and hard before they would invest in any more transport initiatives in our city.”