A motorcyclist escaped with minor injuries after crashing into a stationary van yesterday morning. 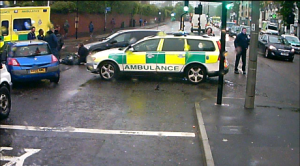 The Lewes Road was closed for a while after the crash at 9am, causing some tailbacks.

A Sussex Police spokeswoman said: “Emergency services were called after a motorcyclist was in collision with a stationary Vauxhall Astra van in Lewes Road, Brighton, on Tuesday (3 June) at 9am.

“The motorcyclist suffered minor injuries. The road was blocked for a while until the vehicles were removed.”