Three members of the public helped rescue a swimmer who was shouting for help as they swam in the sea off Rottingdean beach. 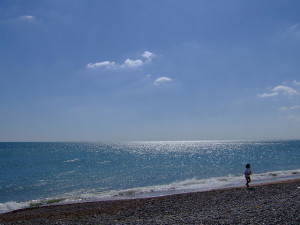 Two men swam out to the distressed swimmer with a life ring thrown to them by a third member of the public shortly before 2pm yesterday afternoon.

Newhaven Coastguard launched a full water rescue team and Brighton Lifeboat was also called, but the casualty was safely on shore by the time the coastguard arrived and the lifeboat was stood down.

Newhaven Coastguard said: “Two members of the public, one a semi professional sea swimmer entered the water and a third member of the public collected a life ring.

“The two gentlemen swam out with the life ring and helped the casualty ashore shortly before we arrived. Brighton Lifeboat had also been tasked but stood down when it was established the casualty was safely ashore.

“Paramedics had just arrived as we got to the scene. They checked over the casualty who was cold but otherwise okay.

“The casualty had swam straight out towards the bathing buoys but struggled to get back.

“When they tried to return the current was making it hard going and they also started suffering from the effects of cold.

“The two rescuers were also checked as a precaution and given the all clear.

“It is always advisable to swim parallel to the beach a few metres out instead of straight out along way. That way if you experience cramp, exhaustion etc you only have a few metres to swim into the beach.”

Near misses on Marina sliproad after sign taken down