Near misses on Marina sliproad after sign taken down

A missing road sign has led to several reported near misses on Brighton seafront as traffic attempts to turn into a one-way street. 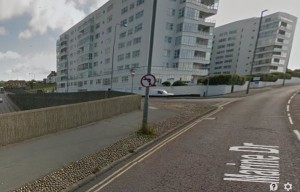 A lamp post was replaced earlier this year at the junction of Marine Parade and Marina Way after being damaged in a road accident.

But the new post didn’t have a no left turn sign attached, and residents say there have been frequent occasions where cars try and turn into the road the wrong way.

A report made to the FixMyStreet website said: “There used to be a no left turnsign on the last lamp post west of the exit from Marina Way sliproad onto the A259 outside Marine Gate, clearly visible to traffic heading east on the A259, but this was removed with the old lamp post earlier this year or late 2014, and not replaced on the new lamp post.

“Residents of Marine Gate report that vehicles are frequently seen attempting to enter the slip road from the A259 and there have been near-miss incidents with traffic using the slip road correctly to exit onto the A259 to travel west.

“Please reinstate the missing sign and repaint the dashed white lines across the exit point.”

A spokeswoman for Brighton and Hove City Council said a new sign was currently under order.

She said: “The street light was replaced after being damaged in a traffic incident. A replacement ‘No left turn’ sign has been ordered and will be installed as soon as possible, and we are looking into the question raised about the road markings.”