The steel cans which will be used to construct the main tower of the Brighton i360 are waiting in Shoreham to be shipped to Brighton beach on Thursday. 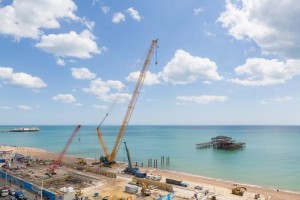 A 100m yellow crane is now erect on the seafront ready to take the cans onto the shore.

The event will be marked on Thursday morning with a special breakfast event, attended by the city’s great and good.

The tower is expected to shoot up quickly once the cans are in place, with the cable car mechanism and viewing pod coming afterwards ready for the attraction to open next summer.

Each can measures between six and 12 metres in height and together will form the shaft of the i360. 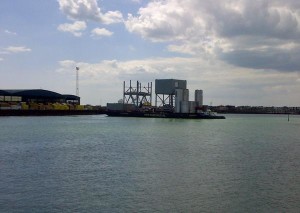 They differ in size, with the taller cans going at the top of the tower and shorter cans, but with thicker walls, making up the lower sections.

Once on the beach, they will be fitted into place by a jacking tower. Rather than add each can to the top of the structure, the jacking tower allows the engineering team to build from the bottom up.

The tower is due to be completed by September.

i360 chief executive Eleanor Harris said: “Once they arrive in Brighton and start going up it will really give people a sense of the scale of the Brighton i360.”

The i360 has also released this image of its new beachside conference facilities, which can cater for up to 1,000 people.

Meanwhile, a few miles along the coast at another landmark seaside attraction, the unsightly mast which has spoilt the view of the Saltdean Lido was finally taken down at the weekend.

This video, shot by Giles Thacker of Shared Space and Light, shows how it was carefully taken down, causing just a small splash in the pool rather than a crashing bang.