WITH VIDEO: A Brighton man was subjected to a brutal attack in which a gang of men and women kicked their victim repeatedly while he lay on the ground.

CCTV footage captured the moment the 28-year-old man ran across Grand Junction Road in Brighton and was knocked to the ground by the group, at about 6am on 4 May.

The man was then repeatedly punched and kicked in the chest and face while he lay unable to defend himself, close to the Grosvenor Casino. 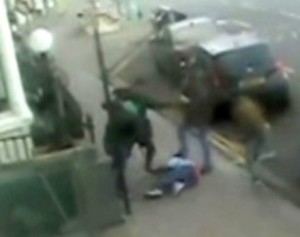 An off-duty police officer and members of the public intervened and helped the victim.

The victim suffered a fractured skull, a black eye and cuts and bruises to his face, arms and legs.

All were questioned before being released on bail until 29 June.

Detective Sergeant Maureen Lambert said: “We do not know why the victim was attacked.

“He was chased across the road and then assaulted by a number of people. We believe we are still looking for at least another three men who struck him while he was on the ground.

“If it were not for the off-duty officer and the other passers-by, the victim could have suffered very serious injuries indeed as the attack was continuing despite the victim being unable to defend himself.

“We are still trying to trace some of the people who intervened and I would urge anyone who was there to come forward.

“We urgently need to speak to anyone who saw any part of the attack so that we can identify and track down those who were involved.”

Anyone with information should email 101@sussex.pnn.police.uk quoting serial 176 of 04/05, call 101 or contact the independent charity Crimestoppers anonymously on 0800 555111.