Sussex and England wicketkeeper-batsman Matt Prior has announced his retirement from cricket with immediate effect.

Sussex said: “The 33-year-old has been forced to call time on his illustrious cricketing career because of his serious injury, which has kept him out of action since last season.

“The former Brighton College student made his first-class debut for Sussex in 2001 and among the early highlights of his professional career was the crucial 148 he made against Middlesex in 2003, a vital innings in terms of Sussex’s inaugural championship-winning season.

“He soon caught the eye of the England selectors and made his one-day international debut in 2004 against Zimbabwe before bursting on to the test match scene in 2007 when he became the first English wicketkeeper to hit a century on debut with an unbeaten 126 against the West Indies at Lord’s.

“He was also named the England Cricketer of the Year in 2012-13, and has played over 150 times for his country across all three formats. 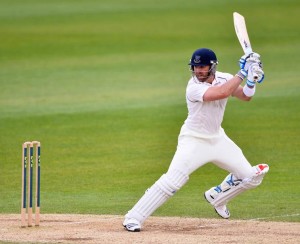 Matt Prior at Hove

“He becomes one of the few wicketkeepers to retire from the game with a test average over 40.00.

“His first-class record for Sussex is also exemplary, scoring nearly 8,000 runs in 146 matches.

“Fittingly, his last appearance for his county came in the 175th anniversary match with Nottinghamshire 12 months ago.

“Regarded as one of his country’s greatest ever wicketkeeper-batsmen, Prior will continue to play a part at Sussex Cricket in an ambassadorial role with the county, which will ensure he continues to be a part of the Sussex family.”

Matt Prior said: “Today is a very sad day for me as I am forced to announce my retirement from the game I love.

“I had been hoping and expecting to be fit for the start of the 2015 season. Unfortunately, this has proved impossible, and I have now had to reach this decision.

“I feel honoured to have played for Sussex and England as many times as I have and shared so many great times with both teams. I also feel privileged to have been involved in an era of such success for English cricket.

“I would like to thank my family, team-mates, coaches and the people behind the scenes that have supported me throughout the years. I have created friendships that will last forever.

“It would also be remiss of me not to thank the fantastic support I have had from cricket fans both at home and abroad.

“I have always tried to play with pride and passion and have a deep belief that the team will always come first – a value that will never leave me whatever I go on to do.

“Although I haven’t achieved all the goals I had set out to, I feel immensely proud of what I have done in my career. Sadly it is now time to move on.”

Sussex’s professional cricket manager Mark Robinson said: “It is a sad day when a cricketer of such talent and character and who has achieved so much, and has the ability to achieve so much more, is forced to retire through injury.

“Matt has done great things for the club but more importantly, has done what we all dream of, which is play for his country with honour and distinction.

“On behalf of all the current playing side of the club, but also on behalf of all those who have played with him in the past, we thank him for the memories and wish him all the luck for the next stage of his life.”

Sussex chairman Jim May said: “While we are sorry that injury has forced Matt’s retirement, everyone at Sussex will celebrate his fantastic career.

“It has been wonderful to see the way Matt developed as a youngster, through winning trophies at Sussex, to becoming an Ashes winning cricketer.

“We are very proud of Matt and hope that he continues to have strong links with Sussex.”