Brighton University vice-chancellor Julian Crampton has been made a CBE in the Queen’s Birthday Honours List.

Professor Crampton, who has held the top job at Brighton for ten years and plans to retire by next February, has been recognised for services to education.

During his tenure, the university has grown and become one of the most popular in the country for applications. 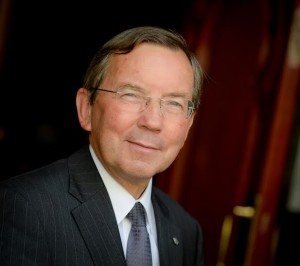 It has more than 21,000 students, supports more than 7,000 jobs and generates £700 million a year for the local, regional and national economies.

Lord Mogg, chairman of the university’s board of governors, said: “The honour recognises Julian’s great contribution to education.

“I know the entire university community will join me in congratulating him on this recognition that comes after an outstanding period as vice-chancellor of this university.”

Professor Crampton said: “I am personally delighted but I would like to think this is not just about me but a reflection of the hard work by a large number of dedicated people, past and present, who have helped build the University of Brighton into the great institution it is today.”

Under his stewardship the university has become one of the most popular choices for students, reflecting its distinctive regional footprint, breadth of courses and links with professional bodies and industry.

So far this year the university has received more than 30,000 applications – up 20 per cent compared with last year. The increase for the sector as a whole is about 2 per cent.

The university also has reputation for undertaking research that makes a difference to society. This was acknowledged when the recent Research Excellence Framework said that the impact of 92 per cent of its research was world-leading and internationally excellent.

Professor Crampton’s personal commitment to the university’s role as an active participant in the community has helped transform the educational experience of 60 per cent of 11 to 16-year-olds living in the Hastings area.

The Hastings and St Leonards Academies Trust has been credited with bringing about significant improvements in educational attainment in the area.

The university has been the lead sponsor of two secondary academies in Hastings, developed out of three schools whose performance needed significant improvement.

It is three years since they opened and both academies have now been rated “good” by Ofsted.

Building on this success, seven primary schools have since joined the Hastings Academies Trust.

The university’s leading role with the trust and the expansion of its campus in Hastings have made significant contributions to the regeneration of the town.

And now the university is expected to become the lead sponsor of a new secondary school in Brighton.